There hasn’t been much buzz about Germany in the world of professional ocean sailing for quite a while now. It’s been 18 years since the “Illbruck” brought home Germany’s last victory with its legendary win at the Volvo Ocean Race, and twelve years since United Internet Team Germany tried its luck at the America’s Cup in Valencia. Ever since, German sailing hasn’t made the headlines. Offshore Team Germany (OTG) wants to change that. Skipper Robert Stanjek and his team have a clear goal in mind – sending their “Einstein” around the world during the 2021/22 “Ocean Race”. It would be the first time in the 20 years following the Illbruck’s win for a team to compete in the race under the German flag.

In mid-September 2019, Offshore Team Germany began taking off. The contenders in the next edition of “The Ocean Race” (TOR) met in Alicante/Spain to exchange ideas and Offshore Team Germany had been invited to take a seat at the table. The team had made it into the Volvo Ocean Race community, directly at the center of the IMOCA Open 60 world. Team Manager Jens Kuphal, CEO Michael End and skipper Robert Stanjek distributed the team’s business card to the other teams registered to participate in the upcoming race around the world. The German delegation was able to establish important contacts and gather valuable information. It was the first step toward fulfilling a dream – not just for themselves, but for the many sailing enthusiasts in Germany. 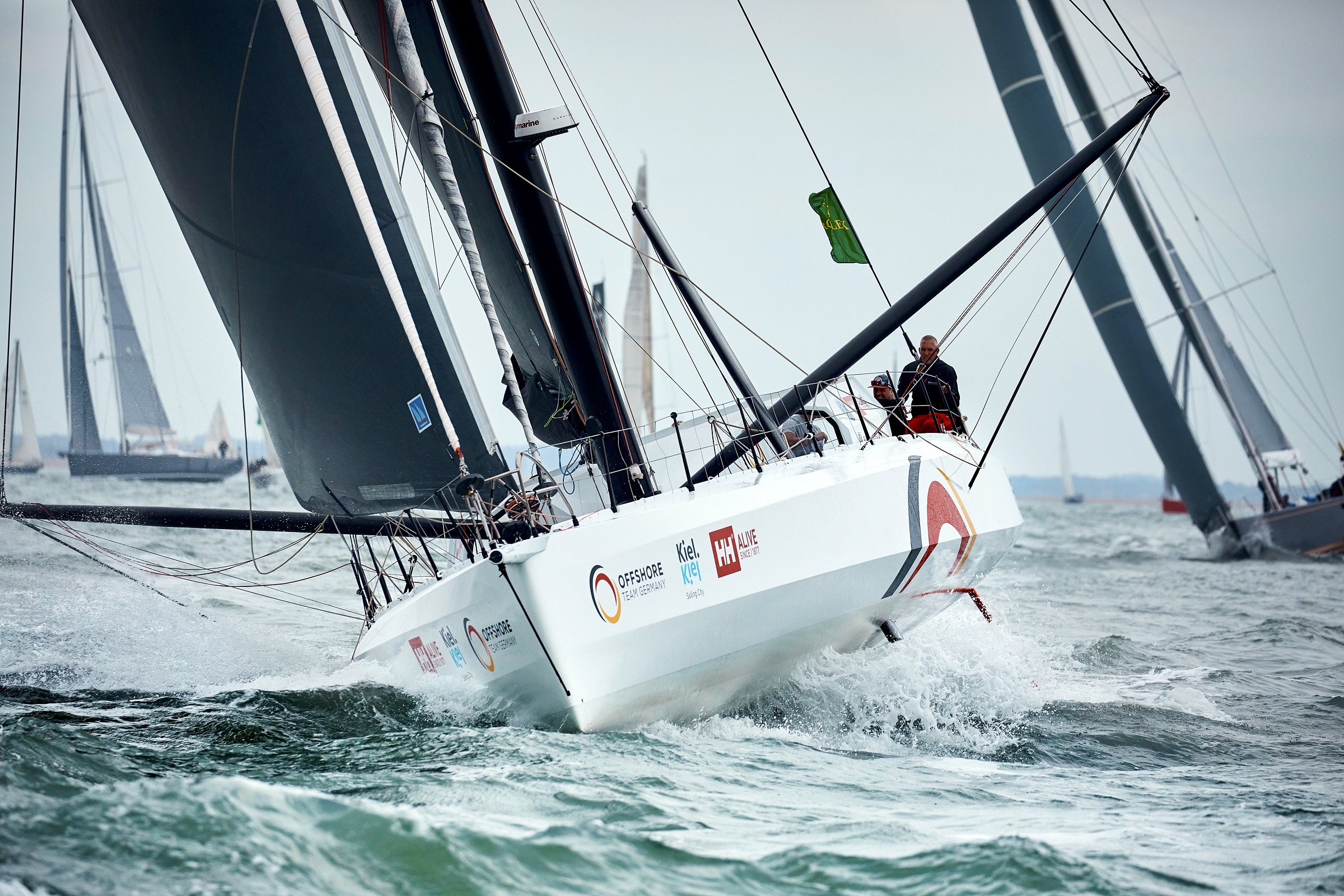 SAILING HISTORY – “MADE IN GERMANY”

Four German yachts have competed in the race around the world since the ocean marathon’s first edition 1973/74. The “Peter von Danzig”, the “Walross III” and the “Schlüssel von Bremen” all sailed in the Whitbread Round the World Race in 1973/74, 1981/82 and 1989/90, respectively. 2001/02 marked Germany’s high point in the history of the race, as the “Illbruck” brought home the victory at the time when the race was entering a new era as the Volvo Ocean Race.

Four German yachts have competed in the race around the world since the ocean marathon’s first edition 1973/74. The “Peter von Danzig”, the “Walross III” and the “Schlüssel von Bremen” all sailed in the Whitbread Round the World Race in 1973/74, 1981/82 and 1989/90, respectively. 2001/02 marked Germany’s high point in the history of the race, as the “Illbruck” brought home the victory at the time when the race was entering a new era as the Volvo Ocean Race.
2021 will mark yet another new beginning for the Ocean Race: it will have a new name, new ideas, new stopover cities and modified structures – and, for the first time in a long time, a contending German team. The upcoming 14th edition of the race will be sailed on ships of the IMOCA Open 60 class. The VO65, which was the designated yacht for the previous two editions, will be for the junior class race this time around. The decision to make this change came in the fall of 2018 and, with it, Offshore Team Germany suddenly found itself in the midst of the events. The decision for the IMOCAs played right into the new campaign’s hands.
Two years ago, Team Manager Jens Kuphal, CEO Michael End and Team Captain Robert Stanjek managed to lay the foundation for yet another #madeingermany campaign. Purchasing the former “Acciona”, an IMOCA 60, got their foot in the door of the international ocean sailing scene. The subsequent designation of the IMOCAs as the new official TOR class took them through the door and center stage.

The next step was to popularize the project on a much larger scale and, to this end, the German Sailing Federation (German: Deutscher Segler-Verband, DSV) presented itself as the ideal partner. The DSV will offer its support by promoting the team through its various channels. As well, the DSV and OTG will combine their know-how to secure long-term perspectives for top German sailors in the. “Working together with Offshore Team Germany holds a special significance for the German Sailing Federation in several ways. Firstly, the high emotions that would accompany the team’s participation in the Ocean Race are particularly well suited for getting sailing more media attention. Secondly, it’s stirring up an enthusiasm among our athletes that extends beyond the younger fans of the sport and is far greater than the excitement surrounding an Olympic campaign,” says DSV President Mona Küppers. She continues, “It’s a win-win situation for both parties involved. OTG can draw on a pool of highly trained sailors and, with our eyes set on the 2024 Olympics, we can together work on creating a successful offshore presence.”

This aligns perfectly with OTG’s goal. Beyond getting an international team of professionals to sail in the race under the German flag, OTG aims to get future generations of German offshore sailors involved. In addition to skipper Robert Stanjek, the team is composed of Finn dinghy champion Phillip Kasüske and Morten Bogacki, who vying to steer OTG’s mini “Lilienthal” across the Atlantic at the 2019 Mini Transat in 2019. The team has brought yet another Olympic hopeful into the mix with 49er sailor Fabian Graf, who took third place at the 2019 World Cup.
OTG’s campaign is meant to inspire not just the ocean sailing community, but an even broader base of fans. During a brief visit to the Störtebeker Opti Cup in Helgoland, the team captivated a group of 120 Opti sailors and their companions with its “Einstein”. Docked in the port right next to the racing fleet, the “Einstein” offered photographers the perfect photo op and invited the youngest sailors and their chaperones on board for an Open Ship. “We can really get on!? I’ve seen the boat on Instagram, but this is awesome,” the young Opti enthusiasts squealed, excited at the prospect of checking out the yacht up close.

One day before the start of Kiel Week, the IMOCA Open 60 was publicly unveiled right in the heart of Kiel.Sailing.City. The audience of invitees stood on the Reventlou Bridge and cheered on the snow-white racing yacht by doing the wave. Annie Lush, the sailor who twice circumnavigated the globe, then christened the ship with the name “Einstein” and a champagne shower.
Emotions were running high shortly before the ceremony: Michael Illbruck, who had led Germany to victory in the 2001/02 Ocean Race, sent the OTG team strong words via video message. “This is amazing. What an uproar, what an adventure!” Michael Illbruck exclaimed and then passed on well-wishes from John Kostecki, the helmsman during the 2002 win. “He’s ecstatic! So, from one team to another: Good luck! We have the fondest memories of Kiel. It was like landing on the moon for us! Even today, sailing under Kiel’s lighthouse was our most memorable experience. We’ll never forget it! Robert, I hope you and your crew can share the same experience.”

The Welcome Race during Kiel Week was the first true test for the boat and its team. The next test took place just six weeks later at the Rolex Fastnet Race. Not only did the IMOCA Open 60 make a strong comeback on the regatta course, but OTG showed it was capable of taking on the open sea. Skipper Robert Stanjek, navigator Conrad Colman and crew members Annie Lush, Ian Smyth and Phillip Kasüske sailed the “Einstein” as the 16th of 390 yachts and the 9th IMOCA across the finish line. The premiere of the completely refit yacht proved a great success in terms of both its ranking at the finish line and, more importantly, the useful insights it gave the team: The “Einstein” had proven to be extremely powerful despite its old set of sails and lack of foils. This was proof that it’s entirely possible to sail a powerful IMOCA Open 60 with a crew of only five members.
“The test was a complete success. I’m more than happy with the performance of the boat and the entire team,” said Team Manager Jens Kuphal, who had accompanied the crew during the race’s 605 nautical miles as onboard reporter. “Sailing around the Fastnet Rock in the middle of the night was an amazing experience. And not just for the sailors, but for the boat itself, too. It was its first time back on a regatta course in more than six years.”

For skipper Robert Stanjek, it was the first real challenge on the “Einstein” since its trial runs: “We wanted to get a feel for the new Ocean Race setup with a five-person crew. It was an extremely intense experience because five people is really not a big team. No one has it easy. You have to manage your energy well. We did a good job and the boat proved that it has potential. I’m completely satisfied – with the crew and with the hardware.”

While the Fastnet Race certainly marked a milestone for the OTG campaign, the team still has a long way to go before the next Ocean Race. Even the race itself still has a lot of planning ahead of it. This became apparent last September when the contending teams met in Alicante. Although the exact course has yet to be finalized, it is already certain that the contours will be sharper than before. It’s also clear that Europe will be receiving a considerable amount of attention from the international sailing community. The race will begin in Alicante yet again and have stopovers in Aarhus/Denmark and The Hague/Netherlands, before ending in Genoa/Italy. In addition to these European cities, Cabo Verde has also been selected as a TOR port. The remaining stopover locations should be announced by the end of the year. On one hand, the selection of international stopover cities explains the spectacle’s worldwide popularity. On the other hand, it plays an important role in the further development of the yacht. The “Einstein” isn’t entirely finished yet. Plans for the foils will first be drafted after the final route has been revealed in the coming months, because the amount of downwind and upwind courses will help determine the appropriate design.

The OTG campaign still has a lot to do before the Ocean Race begins in 2021, but this doesn’t discourage the team in the least. After all, the yacht wasn’t just named after Albert Einstein. The great physicist is also the inspiration for the entire project. And as the passionate sailor once said, “If at first the idea is not absurd, then there’s no hope for it.” 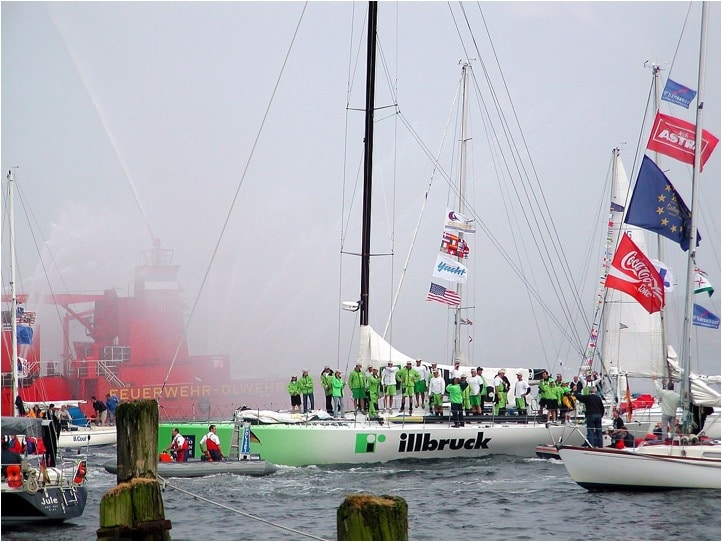